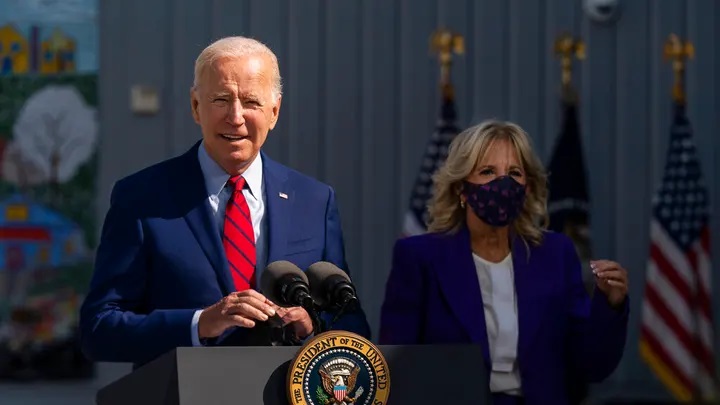 President Biden slammed reporters during an off-the-record chat aboard Air Force One over some negative coverage of him and his administration, Politico reported Wednesday in the outlet’s “West Wing Playbook.”

The item noted the White House press corps aboard Air Force One were “surprised and intrigued” after Biden came to their section. The president criticized “the quality and tenor” of the reporting on his administration, according to Politico.

The president and his family have become frustrated with the press coverage of Biden and believe his work on the job market and economic recovery deserve more credit, the outlet reported.

Recent reports from NBC, CNN and Politico highlighted chaos within the White House as the administration continues to struggle to message on inflation, high gas prices and more.

The president hasn’t sat down for one-on-ones with any major news outlets, such as the New York Times, the Washington Post, the Associated Press or Reuters, according to the outlet.

NBC reported at the end of May that the president was angry with his staff for constantly walking back his public statements because he’s worried it makes him look weak.

Politico reported on Monday that the White House was worried about the parallels to former president Jimmy Carter’s presidency sticking with Biden as the president deals with record high gas prices and inflation.

CNN emphasized a divide between White House staffers and the president’s inner circle, as well as a “dysfunction” among staffers.

CNN emphasized a divide between White House staffers and the president’s inner circle, as well as a “dysfunction” among staffers.

The president sat down with Jimmy Kimmel on Wednesday for his first major interview in more than 100 days. Biden joined NBC’s Lester Holt on Feb. 10 before the superbowl.

Biden took aim at Republicans during the late night discussion, saying, “look, this is not your father’s Republican Party. This is a MAGA party.”

The president also said that the economy was in a good place but noted that inflation was the “bane of our existence.”

He suggested lowering the cost of prescription drugs, childcare and healthcare.

Tom Cotton on Supreme Court threats: Merrick Garland should resign in disgrace or be impeached