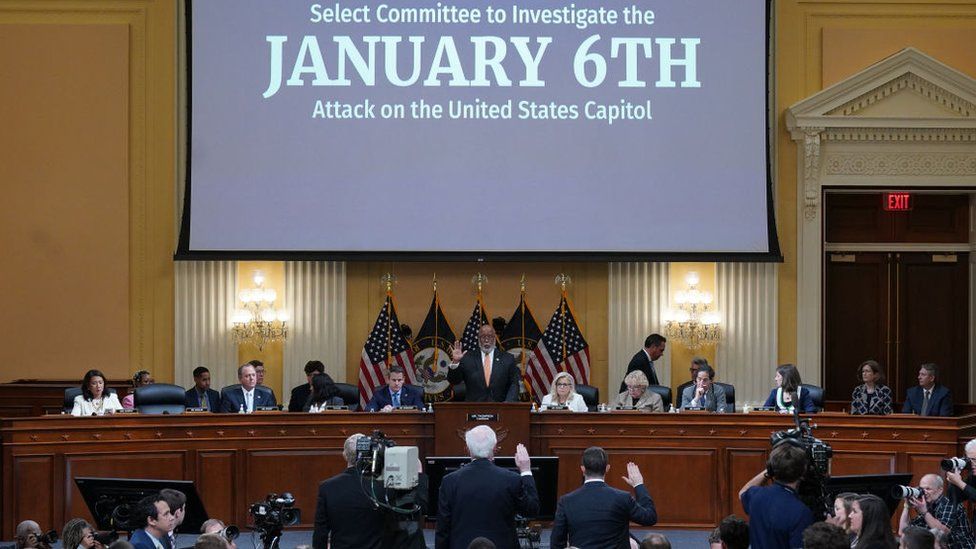 One of the things the mainstream media has tried to get people to believe through their endless “reporting” is that the House members who sit on the much-heralded January 6th Select Committee are committed to upholding the “principles of democracy” or whatever, including “free and fair elections” and all that.

But in recent weeks, a growing number of media outlets including NPR and Axios have expressed their discontent over the Democratic Congressional Campaign Committee’s intentional meddling in some key House races by attempting to elevate so-called GOP “election denier” candidates over their primary opponents because they think it will help their eventual Democratic nominees win their respective races come the fall midterms:

Why it matters: The committee has spent the last year warning that former President Trump and his allies — including candidates running in this year’s midterms — are endangering American democracy by casting doubt on the legitimacy of the 2020 election.

Critics say the message that “this is bigger than politics” and “country before party” — reinforced in the committee’s blockbuster summer hearings — is at risk of being undermined.

Between the lines: Public backlash intensified yesterday when it emerged that the Democratic Congressional Campaign Committee is boosting an election denier in his primary against Rep. Peter Meijer (R-Mich.) — one of 10 House Republicans who voted to impeach Trump for his role in the Jan. 6 Capitol riot.

During a Tuesday interview on MSNBC’s “Morning Joe” program, the group’s chairman Rep. Sean Patrick Maloney admitted that was part of the plan:

“We have a high bar for that. I think if you’re going to do that, you need to really understand what you’re doing. If you’re talking about trying to pick your opponent, you might see us do that, sure. And I think sometimes it does make sense.”

Maloney, I should note, is no stranger to trying to manipulate the system to his advantage. He has also come under fire from his fellow New York Democrats, some of who yelled “racism” and called for his resignation in May after he switched districts once the state’s redistricting maps became official. The move complicated the reelection efforts of Rep. Mondaire Jones, who ultimately decided to run in the newly-drawn 10th District instead of facing off in a primary fight with either Maloney in the 17th (Jones’ current district) or his fellow “woke” Democrat Rep. Jamaal Brown in the 16th.

While the Axios report noted some of the Democrats on the committee publicly stated objections to the DCCC’s plan, it also quoted J6 Committee member Jamie Raskin – who we’ve been reliably told is the most principled of all the “principled Democrats” on the committee – as spinning like a top in his defense of a practice that does indeed undermine the stated purpose of the J6 committee partisans:

“One can certainly understand an argument that it’s categorically wrong to do anything that would objectively help insurrectionist election deniers.

But in the real world of politics, one can also see an argument that if the pro-insurrectionist, election-denier wing of the Republican caucus is already dominant, then it might be worth it to take a small risk that another one of those people would be elected, in return for dramatically increasing the chances that Democrats will be able to hold the House against a pro-insurrectionist, election-denying GOP majority.

Jean-Paul Sartre said that in politics we all have dirty hands up to our elbows. Nobody’s pure. And we are in desperate times to defend democratic institutions and practices.”

Of course Raskin is defending this, because not only is he a member of the sham Jan. 6 Committee, but he’s also – wait for it – the organizing chair for the DCCC.

Raskin, as you’ll recall, was not only House Speaker Nancy Pelosi’s hand-selected lead impeachment manager during the second Trump impeachment show trial, but he also was one of several Democrats who tried to stop the certification of Trump’s 2016 victory.