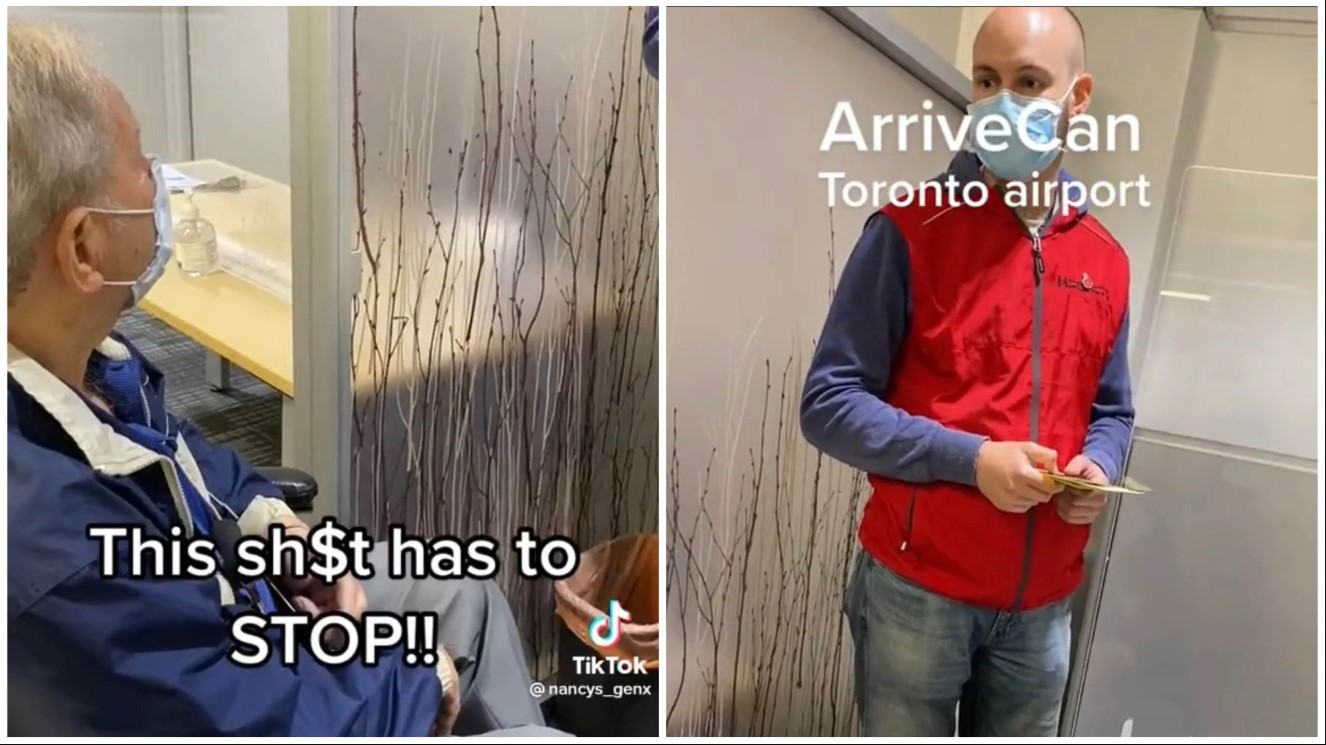 An 86-year-old man was denied entry to Canada and detained for 2 hours for failing to use the “ArriveCan” app, which requires travelers to submit mandatory health information to the Canadian government.

The elderly, wheelchair-bound father and his daughter were harassed and got into an argument with a member of the Canadian Public Health at Toronto airport.

“I have the ArriveCan app, and he does not,” the daughter explained. “He has his proof of documentation showing that he’s been vaccinated. That’s all that’s required.”

The daughter did not agree with the staff’s recommendation to include her father on her ArriveCan account.

“You can put him on your account and get done. How come you don’t want to do it?” the staff asked.

“Because it’s a requirement to get into Canada,” the staff answered.

The daughter asked what would happen if her father were to go on a trip of his own without a mobile phone. Keep in mind that the elderly father does not own a phone.

The 86-year-old father then told the staff, “This is a bureaucracy gone amok… You’ve got my Covid shots. I’ve had four of them. You have my passport. Why not let you do the paperwork and get this over with?”

“Because the government wants the app. Let me ask you, what’s the reason why you don’t want to do it?” the staff asked again.

Then the daughter responded, “I don’t think I should have to. I’m traveling. This is my phone. It’s my app. I’m just having myself on it.”

According to the daughter who posted the video on TikTok, they were given an option to either add her dad to her “ArriveCan” app or be issued a $5,000 fine.

The daughter stated that they did not pay the fine and were only given a warning that the next time her father travels, he will need to use the ArriveCan app.

According to CTV News, all international travelers arriving in Canada via land or air are currently required to enter their information and upload documents to the federal government’s ArriveCAN app within 72 hours prior to their arrival.

“You must use ArriveCAN to provide mandatory travel and public health information before and after your entry into Canada. ArriveCAN is not only keeping travellers safe, but is part of our ongoing efforts to modernize cross-border travel,” the government of Canada announced.

This is just one of the numerous authoritarian rules that the communist liberal government of Canada is enforcing on its citizen and visitors.

The daughter noted that the government will retain the information loaded on the app for two years.

Many people believe that the safety of Canadians is no longer the primary focus of this government overreach. Rather, it is intended to track people and get everything ready for the digital ID.

It can be recalled that Canada is one of two countries participating in the WEF travel digital ID pilot program.

According to Western Standard:

“The Known Traveller Digital Identity, or KTDI, is a World Economic Forum initiative that brings together a global consortium of individuals, governments, authorities and the travel industry to enhance security in world travel,” said the website.

“The first global collaboration of its kind, KTDI enables more secure and more seamless travel that benefits both travellers and the travel industry.”

“Joe Biden and the Democrat Party Are, in Fact, Responsible for Sabotaging Our Economy” – Mark Levin on FOX News